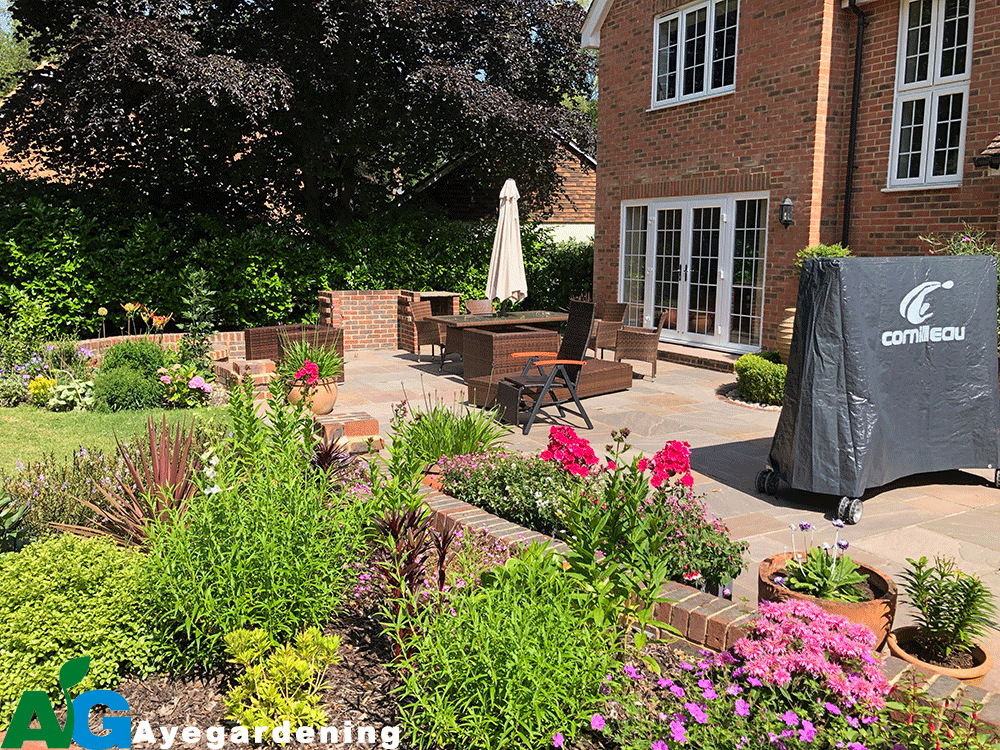 A guide price for a project similar to this size would be £25,000 - £30,000+VAT depending on accessories and not including planting. The client Peter contacted us knowing exactly what he wanted, right down to the type of water feature that he wanted. On the site visit Peter went through the different areas that he would like to be included such as a BBQ, fire pit, water feature and hedging. Susan and Peter discussed the area that the patio would cover and other important elements such as a certain width path to get the ride on mower off the drive and past the patio near the garage.

We put together a sketch of the area and included all the elements that Peter had asked for. As a company we always source quality materials, for example, we choose Autumn Brown sandstone from London Stone, West Hoathly bricks from Fairalls and trellis from Trellis Direct for this project.

The client also wanted wall lights included in the design and a water feature needed to be plumbed in- so we had to plan where the cables were going to go.

The first step was to remove all the old paving and pile this out the front on boards ready for the grabber to come and collect it. The team then had to start digging out the area and shape of the patio. Next step was to construct the footings for the small wall. We were also doing some curves around a fire pit which we had to get right. Throughout the project the team checked things over with the client. Communication is really important - if a client notices something early on that they would like to change slightly it is important that this is communicated as soon as possible to save work being undone further down the line.

After all the footings were ready one half of the team set about constructing the small brick wall with two sets of steps. The other half focused on the patio. We had to change a step on one side to be wider due to the levels, we checked this first with the client and they agreed it was a good idea.

Drainage channels were installed and the patio continued to be constructed, carefully checking levels throughout. Once all the hard landscaping had been completed it was time to start tidying up the area and adding the finishing touches: hedging, lighting and trellis.

We returned with the electrician who connected the electrics and it was the perfect chance to take more photos as the client had got his table and chairs out and the sun was shining!

A few weeks later the client sent us more photos of some lovely plant pots and planting under the trellis. This size patio was over 110 square metres and as the client had a very long garden it didn't look too big at all. The perfect size to enjoy time with friends and family outside for a BBQ or a quiet summer's evening around the fire pit. 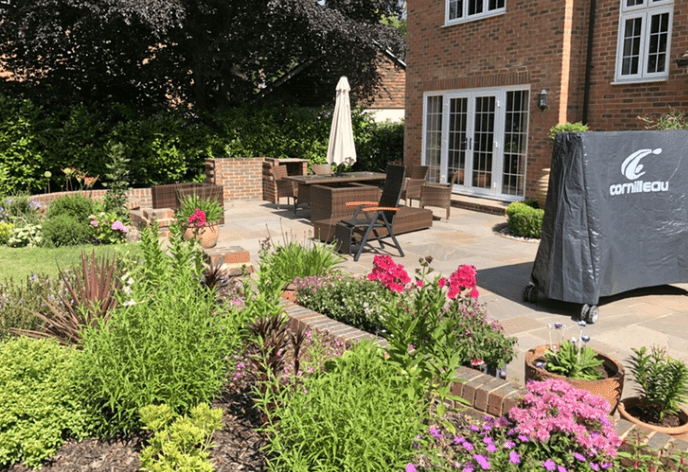 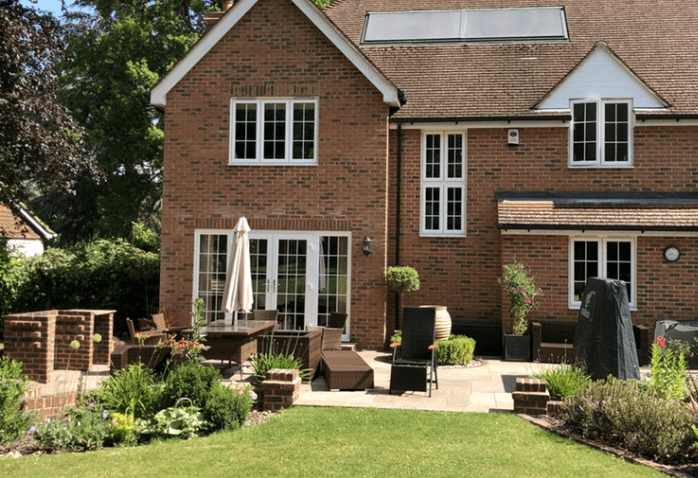 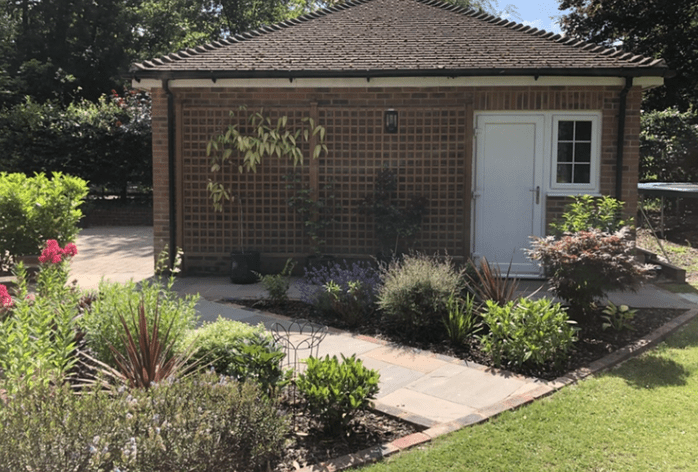 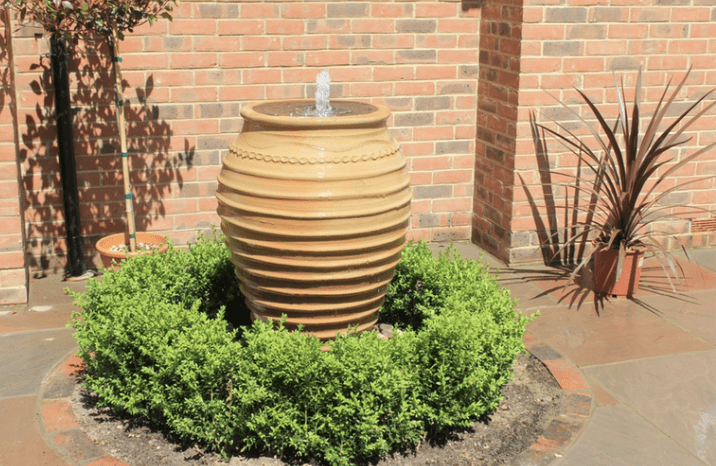 "Thank you very much for all the hard work you have done in our garden in the last few months. The patio and garden looks great. I am sure we will enjoy our new garden thoroughly for many years to come." 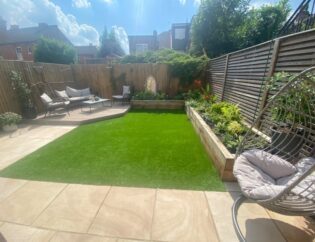 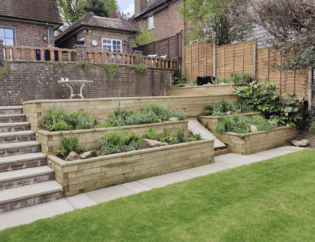 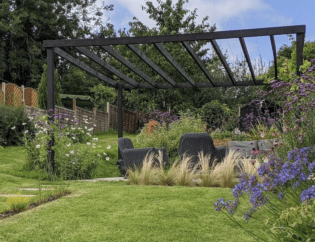 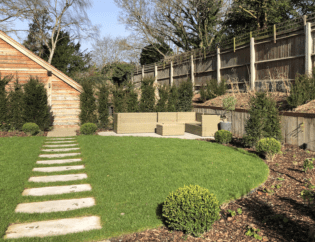 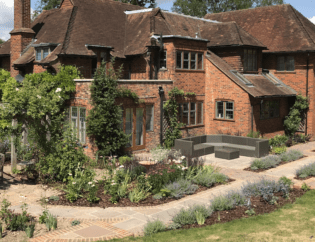 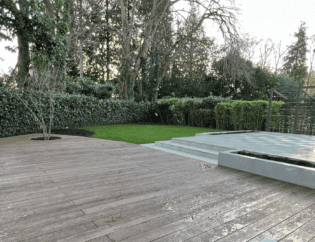 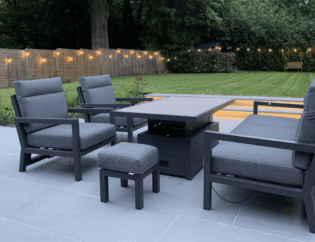 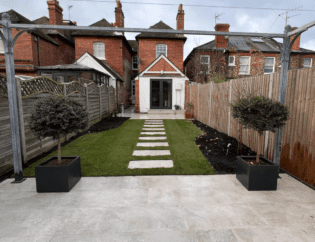 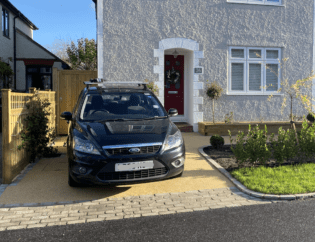 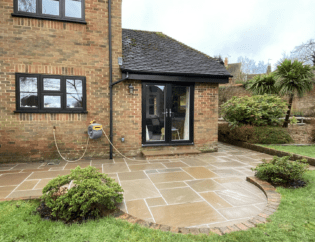